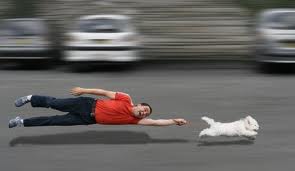 Tonight I let my dog Brownie take me on a walk. I held onto the leash while she pulled me along.

My beloved hound led me to all her favorite haunts along the winding alleyway. She stopped to munch on bark and tall grass, sniff the dirt by the dumpster and generally browse at her own leisurely pace. Brownie decided which direction we would go when we left the house, which fork in the alley we would take and how long we would spend on our stroll.

How thrilling it was to allow another creature to take the lead; how amazing to let go of control, not grasp and tug on the leash anxiously nor fret about what she was rolling in, eating and sniffing. What a relief to unclench my brain and ramble in the fragrant fall night with my canine in charge. It was blissful to relinquish the anxiety of running things.

Lately I’ve been making a habit of letting Brownie take the lead whenever we go out. I want to practice releasing control, allowing other creatures, other spirits to show me where to go.

An existence that unfolds without me forcing, pushing, manipulating, or insisting is a revelation. I discover that life’s loveliness is a gift that is given the moment my hands and brain stop grasping for it.

Sometimes when Brownie and I are out walking up the broad empty alley on these early fall evenings, listening to the last of the summer crickets and inhaling the scent of dry leaves and sweet clematis, I close my eyes for a moment and allow the Universe to lead both of us.

The feeling is amazing:

Posted by mariehelene56 on September 18, 2011 in Creatures, Meditations on Nature

What’s Up With The Ants? 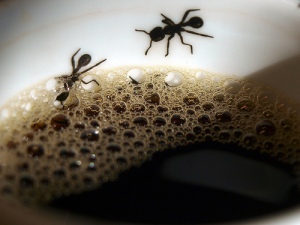 Attention entomologists: The ants in my kitchen are exhibiting strange behavior.

Here’s how I discovered it. A few months ago I bought a coffee pot cleverly designed to make one cup at a time. I was intrigued by the television sales pitch, purchased it from the shopping channel, and for several idyllic months brewed my convenient  java-for-one without incident.

Then one morning I noticed that the gadget was a little sluggish and not all the water was getting through the coffee filter into the cup. I opened the reservoir and made a horrifying discovery: hundreds of ants floating in the water.

In the coming days I noticed a steady stream of ants marching single file into the coffee maker. I saw them scurrying around the grains of coffee in the filter, gathering at the edge of the reservoir, skittering on top of the spilled drops of coffee on the tray. I realized grimly that the reason my coffee maker no longer worked was that it was clogged with thousands of swarming or dead ants, and that there was a line of the doomed critters from the pot clear out to my garden.

OK, I am not a scientist but I feel quite comfortable saying that I know something about ants. Over my lifetime I have acquired some field experience with the species, especially with their eating habits. I have observed, for instance, that ants like sweets and meats: a glob of honey or a spoonful of stew on the counter brings a million ants whereas, say, a jar of cream of tartar or a bunch of parsley do not.

Moreover, in decades of coffee brewing and drinking I have never noticed a single ant taking any interest in a cup of bitter unsweetened java.

Like I said, I am no entomologist. I have read a small amount about the tireless dedication, discipline and great strength of the female worker ants.  I know that ants live in a highly structured society under the governance of a huge Queen who is fed by the working girls and fertilized by male ants who lounge around the colony and die shortly after mating.

Now it seems some force in the ant world is raising the bar and driving these poor beleaguered underlings to a caffeine-addicted lifestyle. Could the Queen be giving orders for the ants to go to my kitchen coffee house and fuel up? Are they falling behind on their work quotas? Do they need a chemical kick in the exoskeleton?

Maybe the desperate insects have developed a taste for caffeine. Perchance they find they can work harder after ingesting some microscopic portion of Sulawesi at my brewing station. They are willing to line up for yards, risk their lives on the perilous coffee tray and face an even greater chance of extermination while trapped inside the percolator.

Whatever is causing this storm to brew, the whole grisly picture makes my heart weep for my poor ant sisters. Perhaps it is because they appear to be acting out in miniature our own senseless, scurrying human lives, fueled by too much pressure and caffeine.

I think I will probably retire my nifty new coffee pot in favor of a simpler one that is better barricaded against the ants and their possible caffeine addiction.

I refuse to be an ant enabler.

Posted by mariehelene56 on April 8, 2010 in Creatures, Meditations on Nature